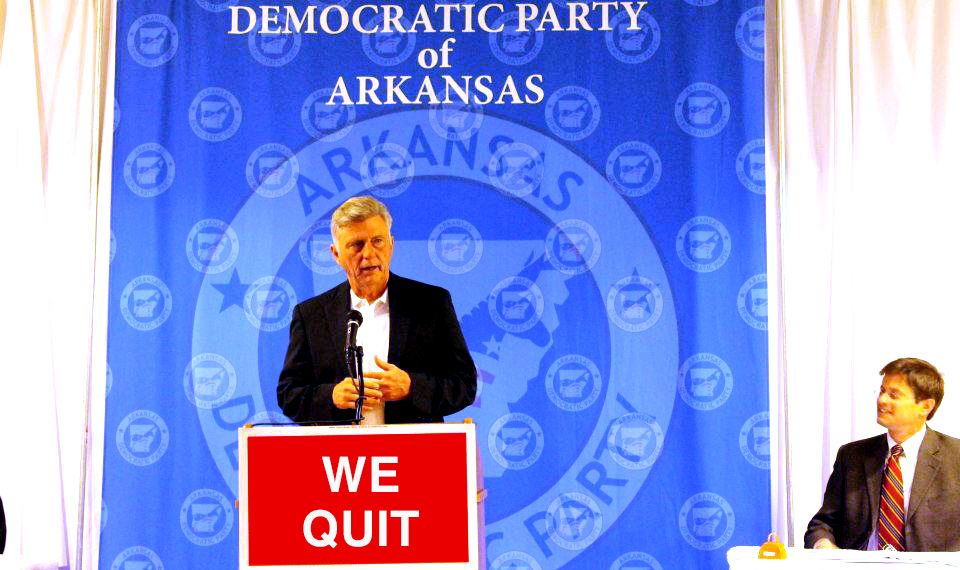 The Democratic Party announced today that after several years of decline and failure to find a single Democrat candidate to run for major office that the party will formally pull out of Arkansas. The pull out will take place immediately and leave 2014 candidates who had previously filled with the party unrepresented.

The move comes on the heals of Mike Ross becoming the Democrat front runner and Mark Pryor voting with Senate Republicans on most major issues including the latest gun control votes. The state Democrats failed to defend a single major elected position in the 2012 elections. The closest candidate was Herb Rule in AR-2, who after multiple DUIs while running for office served as inspiration for the character Peter Russo in the Netflix Series House of Cards.

“We simply cannot continue to sponsor and fund candidates in Arkansas who are really just Republican Insurgents,” a spokesperson for the Democrat National Committee tells us. “We have a high level of evidence that believes us to believe many of the Democrat candidates over the last several years have been covertly placed by the GOP. Look at Pryor for example, even most moderate Republicans voted for the gun bill, don’t even get me started on Ross’ congressional voting record, he makes Huckabee look Liberal. For the handful of local candidates who are really Democrats, best of luck but you are on your own.”

The removal of the Democrat party leaves a void in many races across the state. Several Democrat candidates have announced that they will defect to the Republican party or run as Independent. We have word from Ross and Pryor’s office that they intend to file as a party to be named the Demlican Party of Arkansas.

“I hate that we loss Democrat support. The Demlican Party will serve any displaced conservative Democrats who want to run against Republicans in a general election” a spokesperson for the party says. “We are in the process of drafting up initial party material. For those wanting to get an early start our official colors will be yellow and Purple. The mascot will be a Mule to match our blending ideologies and will be purple with a yellow belly for the official logo.”

Governor Beebe Begins Moving Out of Governor’s Mansion, Steals All the Doors