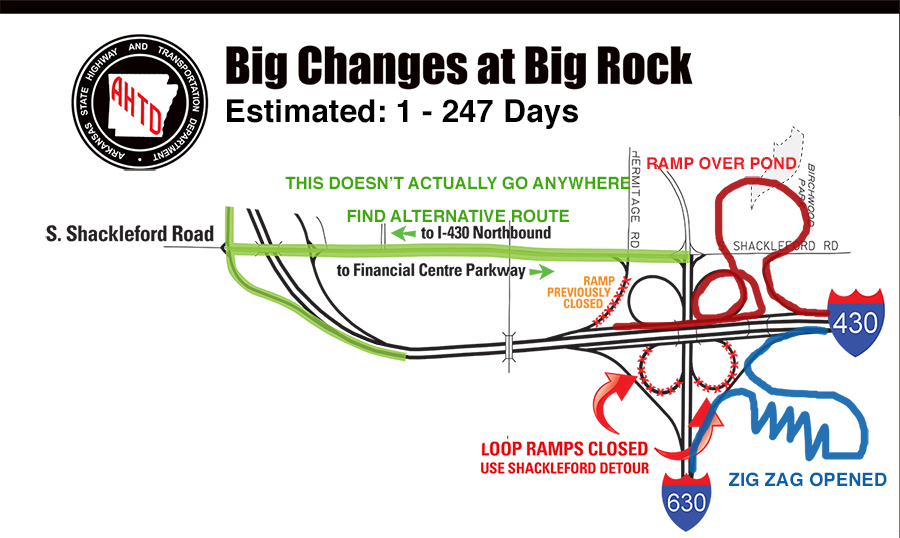 The Arkansas Highway Department today has released their next round of detours and lane changes for the Big Rock (430-630) interchange project. The largest part of these changes come from closing off two of the four loop ramps that previously existed on the south side of the interchange.

Drivers going to Chenal can expect a detour that takes them north, through a pond, back around twice on the loop on the north east side, before finally arriving on Financial Center Blvd. This is to free up space while paint dries and is expected to take 14 weeks due to the extra slow drying paint used in the process.

Going from 430 North to 630 East drivers will now be pushed off onto a previously unused portion of dirt road that will cross over the newly exposed rock formation and back down the size of the hill. Because of the steep climb up the hill a zigzag has been added to aid in traffic flow. Commuters are cautioned to find an alternate route during rainy days because this area will not be paved. During the time period (which has yet to be determined) workers will continue to place screws in steel beams hanging overhead of the previous ramp.

Finally the highway department has added a road between financial center and 430 that does not actually go anywhere in an effort to remove lost and confused out of town drivers from the central roadways. Residents are encouraged to avoid this at all costs.

“I think we are making real progress on this interchange,” a Highway spokesperson tells us. “We have already seem a large positive influence on traffic flow through this area due to commuters finding alternate routes.”

This total phase of the project is expected to take up to 247 days to complete, at which point they will wait two weeks and do it all over again.