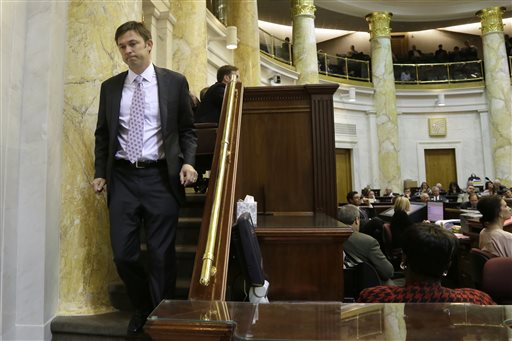 House Speaker Davy Carter still going to work every day despite the end of the legislative session. Carter has been seen on the podium and in committee rooms for the past two days.

This legislative session was the longest in Arkansas history, and was Carter’s first as speaker of the house. Tuesday afternoon when most were elected officials were celebrating the close of the session, Carter was no where to be found.

“I stopped by Carter’s office Tuesday to see if he was going to join us at Capital Bar and Grill and he had a stack of papers on his desk and was working furiously,” one Representative tells us. “He told me that he had a ton of bills to review before tomorrow and he would just see me in the morning. I had to go double check that we really did close the session.”

Capitol staff tell us that Carter has been at the Capitol the last two days at 7:30 and has been seen roaming the hallways, sitting in his office, and even at one point giving a speech in the House chamber to an empty room. Sources tell us that outside of cleaning staff he has been the only person in the Capitol at times.

We reached out to Carter for comment on the behavior. “At the end of the last session I had nothing to do, I hated that feeling” Carter says. “At one point I even watched one of my kid’s Twilight movies. Do you know how awful that is? This time however I am the boss up here, and I am just going to keep the session going.”

The Governor’s office has said that while he has no legal standing to pass bills after the close of a session they will still issue a veto of anything that comes out of the house on principle.