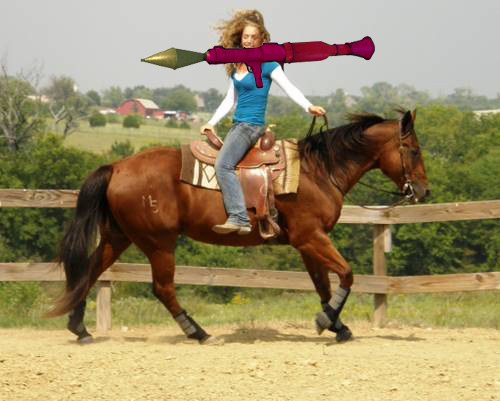 Open carry advocates have discovered a loophole in a bill from 1906 that allows carrying “portable projectile explosion devices” that are “clearly visible” and “cannot be confused for other object” while riding backwards on a horse. The advocates believe that will allow for openly carrying brightly colored bazookas while on horseback.

The bill, Arkansas code 3-06-95, was originally intended to protect mine and other blasting workers from blowing themselves up in explosions where they were shooting or throwing dynamite. This was a common practice in Arkansas in the early 1900’s when many large mining operations were in existence.

The bill (outlined below) was originally enacted after a series of accidents involving both projectile explosions in front of a moving horse, where the horse would run up on the explosion, and individuals on foot not moving away from an explosion quick enough. The bill is written to ban firing of projectile explosive devices while on foot, or moving on an animal toward the explosion. The law outlines that it is save to do so only when on an animal moving away from the intended explosion.

This law was never closed at a later date once more advanced methods were put in place. Open carry advocates see this as a huge win for moving beyond the ability to openly carry only small fire arms. “We think this is a huge opportunity to show our 2nd amendment rights” says spokesperson for Arkansas Carry. “With the State legislature between sessions we can freely express this right until the next session. We do plan to fight any attempt to close this loophole by our elected officials.”

“SECTION 14. Arkansas Code § 3-06-95 reads as follows:
3-06-95. Carrying a portable projectile explosion device.
(a) A person commits the offense of carrying a portable projectile explosion device if he or she possesses such device on or about his or her person, in or on vehicle or animal occupied by him or her, or otherwise readily available for use with a purpose to attempt to unlawfully employ as a weapon against a person or structure in front of them.

(b) A portable projectile explosion device may be used openly if the device is colored in a means that is clearly visible and cannot be confused for other object. Device can only be fired openly in the backward position directly seated on an animal moving the opposite direction of the projectile.”