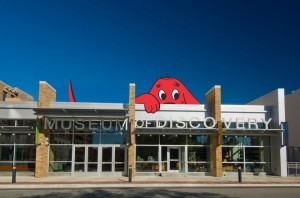 Little Rock Police and animal control are on the lookout for a giant red dog believed to have attacked downtown Little Rock shortly before noon today.

The dog said to be bright red and roughly 43 ft tall was first spotted by the Museum of Discovery building in the River Market district. Several witnesses were able to capture photos of the dog (as see here) before it began taking large bites out of the building, eventually eating it all. The dog then wandered down President Clinton Avenue knocking over lamp post and a trolly before disappearing somewhere along the banks of the river.

A number of Museum discovery personnel have gone missing including recently appointed CEO Kelley Bass. Animal control experts have warned families to stay calm. “Most likely given the size of the animal in question your family members were swallowed whole and will be found alive and well,” says a spokesperson with LR Animal control. “We will be patrolling the area over the next 24 hours looking for large piles of excrement. We are convinced we will find them together in a large pile in a 10 mile radius.”

Witnesses say the dog appeared “out of no where”, initially peaking his head over the roof of the newly renovated portion of the museum. After sniffing around the building a number of times the dog began taking very large bites. Visitors could be seen fleeing the building, although by most accounts the dog seemed more interested in the building itself than the individuals.

“The dog exhibits classic signs of being a puppy. Young dogs frequently chew on objects they find fascinating as a way of exploring them further” a local veterinarian tells us. “I would guess that the dog is no more than a year old and found the shiny material and modern architecture used in the building interesting. If that is true it will be amazing to see how large this dog becomes at full size.”

So far authorities have no leads on where the dog is currently. The animal reportedly hiked his leg on the side of Robinson Auditorium before possibly crossing to the other side of the river. Authorities urge citizens to use caution and report immediately any sightings of the animal. In the meantime animal control is requesting all citizens to bring unused dog bones to the River Front Amphitheater for construction of a large treat to attract the animal.