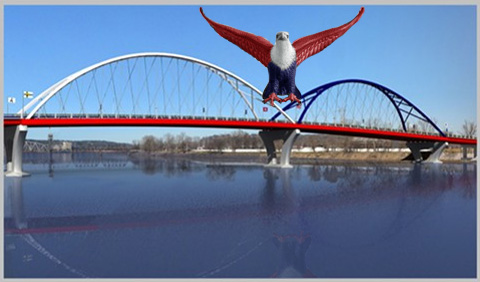 The new Broadway Bridge Committee, consisting of Pulaski County judges and officials from Little Rock and North Little Rock, today unveiled the final design for the new broadway bridge. The current bridge is set to be deconstructed this summer and construction on the new bridge will start in early 2014.

The new bridge will be be branded as “America’s bridge”. The committee submitted original plans for turning the bridge into honoring America in fall of 2012. The designs called for a red, white, and blue paint scheme that would also utilize LED lights at night to make it appear to “wave like a flag”. The road level of the bridge would be decorated with stars and honor all branches of the military.

“Overall the response to the original bridge was good, but there were some very vocal opponents,” said a broadway bridge representative. “After a few months of meetings we decided that maybe it was not “American-y” enough to be called America’s bridge. So we went back to the drawing board. In one of those meetings someone came up with the idea to throw a giant screaming eagle on top of the bridge. I think that is the most amazing idea yet.”

The revised bridge design will feature a 25 ft screaming eagle statue positioned between the two main archways of the bridge. It will carry over the bridge’s color scheme featuring a blue body and red wings. The back of the eagle will be be blue with stars running from the neck to the end of the tail feathers.

Additionally to keep with the American tradition the bridge now features an integrated sound system that will play a special rendition of “America the Beautiful”. “We wanted something to go over the top to show our American pride. We didn’t want to play a normal rendition of the song so we contacted Hank William’s Jr. to cut us a special version of it. We thought that highlighted our American roots but also showed our southern culture. Think of it as a mashup between American the Beautiful and All my Rowdy Friends” a committee board member tells us.

Final designs for the bridge as well as a live concert featuring the new song will be presented during the yet to be announced Hank William’s Jr concert at this year’s River Fest.